Call phones from Gmail (for U.S. users only)


Is Gmail's voice and video chat becoming a serious Skype competition? Now, it even supports calling to normal phones.

The new feature is only available for Gmail users in the USA. Hopefully, this will change some day.

Gmail voice and video chat makes it easy to stay in touch with friends and family using your computer’s microphone and speakers. But until now, this required both people to be at their computers, signed into Gmail at the same time. Given that most of us don’t spend all day in front of our computers, we thought, “wouldn’t it be nice if you could call people directly on their phones?”

Starting today, you can call any phone right from Gmail.

Calls to the U.S. and Canada will be free for at least the rest of the year and calls to other countries will be billed at our very low rates. We worked hard to make these rates really cheap with calls to the U.K., France, Germany, China, Japan—and many more countries—for as little as $0.02 per minute. 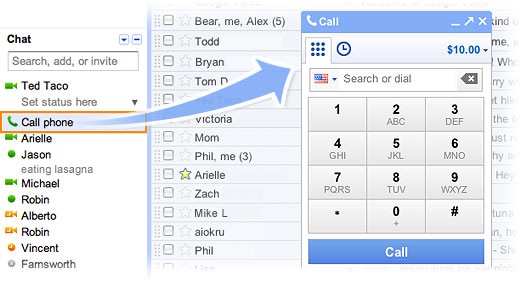