Picasa for Mac looks and works much like Picasa on other platforms, and offers trademark Picasa features — such as non-destructive editing, and the ability to keep track of photos anywhere on your hard drive, then automatically account for new images as you add them. Right now, Picasa for Mac is still in Google Labs, but we very much wanted to get an early version out to folks attending Macworld (you can learn more about this beta release at the Google Photos blog). To run Picasa, you'll need an Intel-based Mac running Mac OS X 10.4 and above. We hope you'll give it a spin, and give us your feedback in person — members of the Picasa engineering team will be conducting demos at Google's Macworld booth all week (you can also check out the video tour below).

Like iPhoto, Picasa has an "Email" button to compose emails in Mailplane. Just make sure Mailplane is your default email application (see Preferences/Advanced). Then go to Picasa's preferences/Email and set Mailplane as your email app. 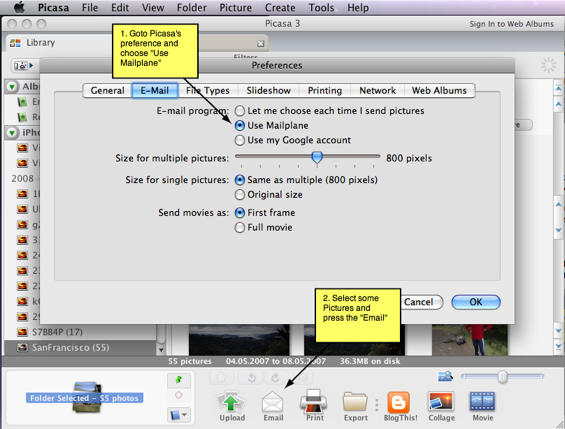