This function is useful for customers using many accounts by reducing the amount of tabs open at once. Having less tabs open saves memory and screen-estate.

We have three cases in the example below: 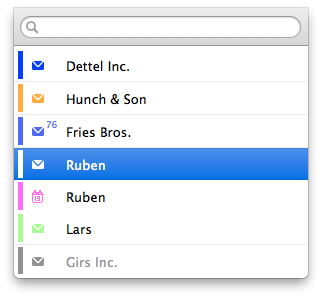 1) Dettel Inc., Hunch & Son and Fries Bros. are single tabs in a separate workspace. Switching between them is fast and feels like switching back in Mailplane 2.

2) Ruben (Email), Ruben (Calendar) and Lars are three tabs in the same workspace. Switching to one of them might take a bit longer because it loads the two other tabs as well. But afterwards it’s very quick to switch between those tabs. That’s what we’ve been using in Mailplane 3 so far.

3) Girs Inc. is colored in gray and represents an account which hasn’t been loaded so far. Switching to such an account opens Gmail in a separate workspace and performs a sign-in.